We recently returned from 9 days at Disney World, and honestly I think I am still recovering. A little bit in a fog and a little bit still pretending to be in that Disney bubble. No, we did not plan for 9 days…but that’s a story for later on.

All in all, our trip was amazing… the weather was HOT. Sure, it’s Central Florida, but even locals said it was abnormally hot for that time of year. The kids, my 3 and my cousin’s 2-year old daughter, were amazing. They had such a magical time and provided a lot of laughs along the way…. actually, A TON of laughs.

This blog post is dedicated to the memorable, hilarious, and strange events that happened to us at Disney World. 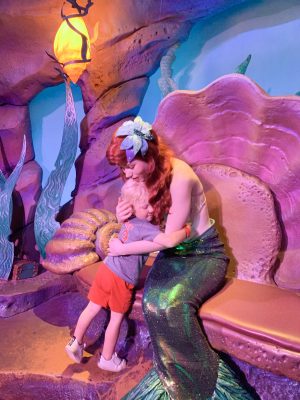 Adam’s Hugs: This was our first trip that we genuinely sought out meeting the characters. In years past our kids have been too young for the characters and cried which made standing in those lines not worth it. But this year the children were armed with Autograph Books (they were V E R Y territorial of those damn things) and we waited to see as many characters as we could.

The first one we visited was Ariel at her Grotto. After meeting Ariel (Eden’s favorite princess) Adam turned to her and started giving air kisses and air hugs… it must have melted her tail because she called him back to her for yet another hug. From that moment on it was game over for the characters (especially the princesses). They all received hugs from Adam.

Three Cabarellos: Anyone ever see the 1944 animated film The Three Cabarellos featuring Donald Duck, Jose, and Panchito? No??? Well, lemme be the first to tell you it’s trippy. The basic gist of the film is Donald Duck chasing women. Needless to say, it’s Adam’s FAVORITE movie. In fact, he’s sitting in my office right now on his iPad watching it for the 758th time. 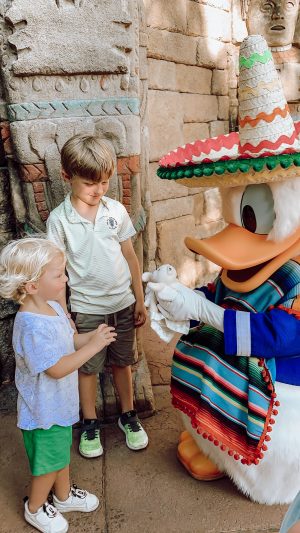 In Mexico’s Pavilion at Epcot there is a Three Cabarellos ride. There is never line, because well, truth be told it’s not that exhilarating. Unless you are my children… who insisted we ride it 4 times. Yes, during the duration of our 9 day trip we hopped aboard that boat 4 times.

The real highlight was when Donald, dressed as a Cabarello was hanging around Mexico where Adam pretty much lost his ever-loving mind and gave him an abnormally long hug. Like, it turned a bit awkward and the Disney worker had to tell Adam Donald was hungry and needed to go eat a churro. hahahah

Eden’s Tooth: One afternoon at the pool Luke and Eden were diving for a Dory magnet Eden insisted on purchasing, when Luke head-butted Eden’s mouth and loosened one of her bottom teeth.

Fast forward to the next day at Animal Kingdom, Eden was enjoying a massive cinnamon roll when she stopped chewing and started talking to me. I looked down and noticed her tooth was missing! 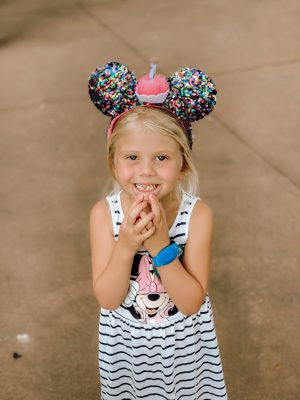 “Where is your tooth Eden??” Instant tears started rolling down her cheeks because she had no idea where her tooth went. Yes, Eden lost her first tooth and swallowed it at the Animal Kingdom. Then Luke started crying because Eden lost a tooth before he did.

Then about 20 minutes later Adam was running with a newly purchased cheetah when he dropped the stuffed animal and a woman in a motor scooter ran over it. SO many tears that led to Adam throwing up all over his clothes… THIS would have been a great time to enjoy a glass of wine, but #pregnancy.

Eden’s Savage Ways: Speaking of Eden, on the second to last night she stopped us all at Epcot and took off her shoes. You see, Luke and Eden fought the entire trip to be the first to the hotel room with the card to open the door. On the second to last night though, Eden had had enough and hid both hotel cards in her shoes…. keep in mind, she had walked around for several hours like that. #savage 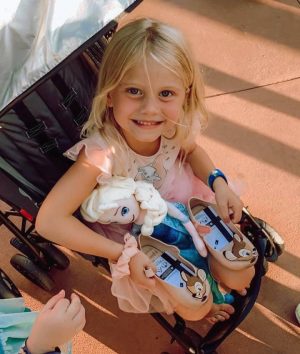 Star Wars: Walt Disney World’s Hollywood Studios is a huge hit for my children, especially the boys… more specifically, LUKE! Two words: Star Wars. Need I say more? Luke had the chance to meet BB8 and was even called out of a crowd by some Storm Troopers for a photo opportunity. The Imperial March, Star Wars show, Darth Vader, and so much more. If you have boys and are traveling to Disney, Hollywood Studios is a must. 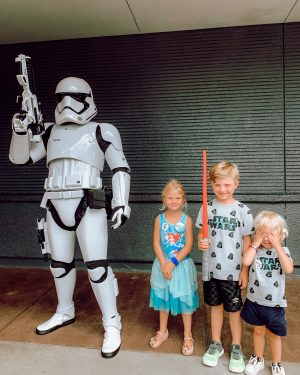 My Voyage to the Hospital: Toward the end of our trip, I started to notice my left leg swelling significantly more than the right. Granted I do have a fairly large varicose vein on my calf … thanks pregnancy! I mentioned something to my family about it and they encouraged me to call my doctor right away.

My doctor advised me to go to the ER where I underwent a blood test and ultrasound. Everything checked out just fine and we were in and out less than 2 hours! That led to staying another 2 days at Disney because we couldn’t get a decent flight time. Not a bad place to be stranded!

So you see, 6 months pregnant or not, this was one of the best trips ever. We loved every second, except maybe the meltdowns…

Tell me about your most magical Disney memory in the comments below! Oh, and here are some more pictures from our trip.