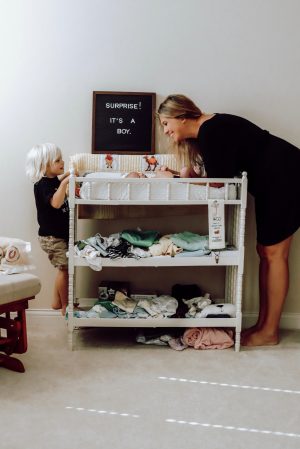 If you’re new here, let me fill you in on my 4th pregnancy. Like the three children before, we did not find out the baby’s gender early. We like to wait until the baby is born to see if we’re adding another girl or boy to our family. We LOVE the surprise!! However, I know it’s not for everyone.

That being said, we always have to have boy names and girl names ready to go. Our boy name, Jude, was determined very early on in my pregnancy. We have three other children: Luke, Eden and Adam. All biblical names, all 4-letter names, all gender specific names… so Jude just seemed like a natural fit for us. Luckily, we had another boy because our girl name… well, we were never 100%. Oddly enough, we were both CONVINCED we were having a girl, but we just could not decide on a name.

In fact, while I was in labor our L&D nurse was even googling baby girl names for us. We really loved Diana, and probably would have gone with that name, but we also could have been very easily persuaded to chose something else.

I asked you all (on Instagram) for baby girl name suggestions and you all delivered! Many of your name suggestions were trendy, which was something we were trying to avoid. We also didn’t want a name in the Top 50 on popularity charts, or something that was quickly rising. We also didn’t want something so unique people were confused by it, or have difficulty pronouncing or spelling it: like Shanisty. I love my name, but 30 some years of having to explain it, correct people who mispronounce or misspell it gets realllllly old… please consider that, parents!

The final requirement in choosing a girl name was everyone in our family had to agree and love the name. It was really important to us to include the children in the decision process. Eden was a VERY hard critic. She shot down every single name we suggested, and came up with her own. She loved Alice, Ally, and Emerson…all great names, but we didn’t feel they were a right fit for us.

Luke was second hardest to please and didn’t hold back his feelings at all. Being the numbers guy he is, he even gave them rankings. One of our names got a 00. Sorry, Liv. He told me it wasn’t a real name, of course we want the baby to “live” and it was ridiculous to even consider it.

Adam was the last one to voice his opinion, and while he didn’t really say much on his feelings, we wanted something he was able to pronounce and enjoyed saying.

The kids chose the name Diana while watching The Little Mermaid. If you recall the scene where Prince Eric takes Ariel on the boat (Kiss the Girl) he’s trying to guess her name. His first guess is Diana. The kids heard it and told me immediately that’s what their baby sister should be named!

So, what were our other girl names?

Here is our list, in no particular order along with name meanings, our thoughts and popularity ranking.

Hopefully, these will help you in your baby name journey!

So there you have it. Our grand list of girl names that we’ll (likely) never use!