Skip to Content
COME AND GET IT! New posts to your inboxSUBSCRIBE
Home Family Luke’s golf journey and getting to the World Championship 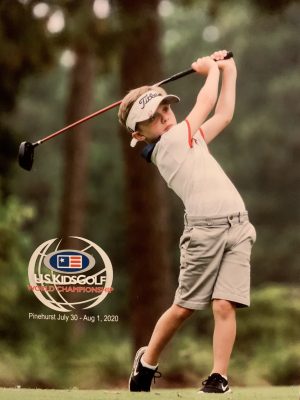 We just returned from one of the most amazing trips. It was kind of a last minute decision to register Luke for the U.S. Kids Golf World Championship at Pinehurst, but we are so glad we did. We learned so much and met so many wonderful people… but I’ll get to that in a second.

If you follow me on Instagram, you already know Luke is a golfer but you might not know how it all started. When Luke was less than a year old we bought him some cheap plastic clubs from Walgreens. I honestly think they were $5 and they came with a plastic carrying case. I remember him crawling around our house in Birmingham with his plastic club and plastic golf ball in hand.

Fast forward to when he turned 1 and was able to walk, Luke was really fond of a broom we had in our Lexington home. We decided to swap out the broom with a cut down golf club and he instantly was attached to it.

Jeff started swinging the club with Luke and showing him how to hit a golf ball before his second birthday. They would spend hours in our Kentucky backyard hitting balls. When we moved to Savannah, Jeff started taking Luke to the range. He was only 2 years old and struggled to swing heavy clubs, but he was hooked. When he wasn’t using his real clubs, he still carried his plastic clubs with him everywhere we went. 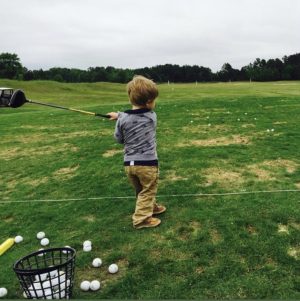 At age 5, we started to understand golf wasn’t just a phase for him and he was begging us for lessons. We started with his golf coach when he was 5 1/2 years old and entered him in his first golf tournament last fall at the age of 6. We had no idea how he would do stacked up to other kids his age. Luke ended up winning his first tournament and went on to win the U.S. Kids Golf Fall Tour in Columbus for his age group.

We know Luke is very far from the best golfer… and Luke knows it too. He understands that golf is a very challenging sport and even the pros have bad days. Sure, we are proud of Luke, but we are also very realistic and keep him grounded too.

A couple weeks ago, I received an email from U.S. Kids Golf telling us Luke qualified for Pinehurst. If you’ve ever seen the Netflix Documentary The Short Game, you’re already familiar with this tournament. It’s kind of like the Super Bowl of youth golf and brings the best golfers from all over the world to a 3-day tournament in North Carolina. 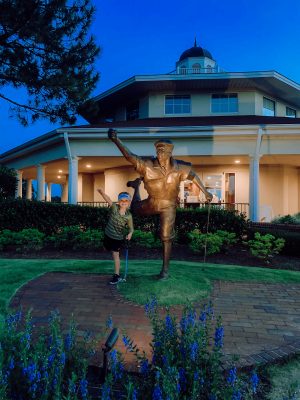 We jumped on the opportunity and knew it would be a great learning experience and he’d have a fun time.

Little did we know, it changed our entire mentality toward the game. We were absolutely blown away by the talent of these young golfers. These kids were making incredible shots consistently.

During our practice round, Luke was paired up with the #1 golfer in Mexico who soon became Luke’s new best friend. Sergio and Luke really hit it off and putted with each other for hours after each round. While Sergio came in 5th, Luke admired his talent and unbelievable putting skills.

Sergio wasn’t the only new friend Luke made. He met kids from Florida, California, Germany, Australia, New Jersey and more.

I can’t even begin to explain what this tournament did to me as his mother. I get emotional even thinking about how awesome it was to see Luke with kids his age playing a sport they love more than anything in the world. Golf isn’t exactly the most popular sport among 7 year olds, but these kids eat, sleep, breathe golf… just like Luke does. We had to pull Luke off the putting green in the evenings because it was too dark to even see his ball. 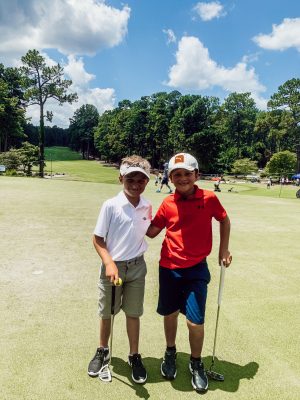 He played 4 rounds at Pinehurst, and while he didn’t place as high as he would have liked… playing with the top 100 7-year old golfers in the world was the most remarkable experience.

Since our return, we’ve purchased Luke new golf clubs. He’s never had a new set or a full set for that matter. We felt a little like Tin Cup rolling into Pinehurst with his 5 clubs and a putter, when all of the other kids had full sets. It wasn’t a bad thing and we don’t regret it at all. I tell you to try to explain the pure JOY he experienced this week when we showed him his new set of clubs. (see video!)

Luke has hit the range every single day since our return for 2 hours. When he’s at home, he’s putting or hitting balls in our basement and when he’s not golfing he’s watching golf videos on YouTube or The Short Game for the 5,039 time. The kid is obsessed. 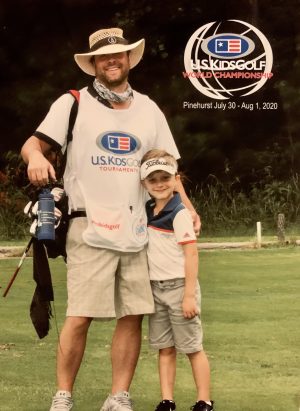 We witnessed a lot of intense emotions at Pinehurst. Kids crying, parents screaming, lots of emotions flying around. We never tell Luke his score while he’s playing or the other kids scores, we want him to always understand that he is playing the course not the other golfers. “Old man par” as Luke calls it.

We believe that intense coaching can drive children to burnout. I asked Jeff if he thinks Luke will burn out, he looked at me, shook his head and pointed to his heart. Golf lives in Luke’s heart. That being said, Jeff and I will continue to support Luke in golf as long as he loves it and wants to play. When he comes to us and says he doesn’t want to do it any longer, we’ll stop.

One of the best things I read on our trip was a quote at Pinehurst #2 Club House from Payne Stewart.

Truer words have never been spoken… 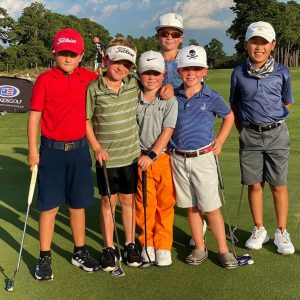 “But in the end it’s still a game of golf, and if at the end of the day you can’t shake hands with your opponents and still be friends, then you’ve missed the point.” 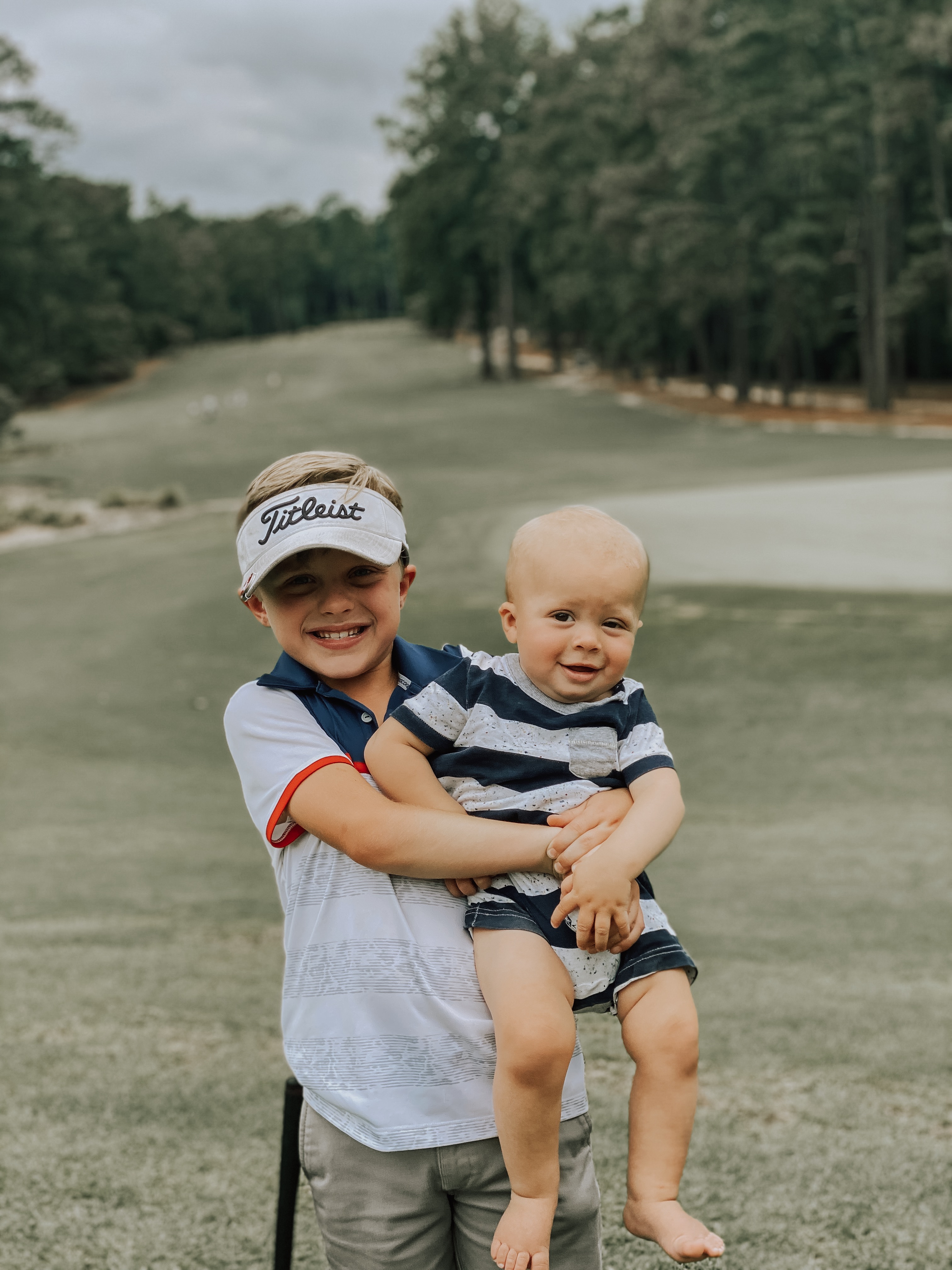